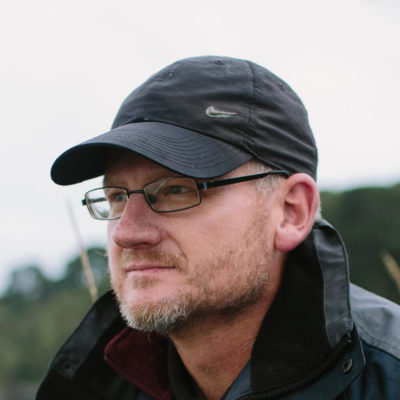 It sounds so obvious, so simple. You take inedible food waste, you make compost from it instead of burning it into the atmosphere, you regenerate the soil to grow healthier food, fibre and fuel. It closes the loop, completes the circle.

As a Soil Food Web microbiologist, Glyn Mitchell knows that while it certainly all makes sense, it is a lot more complicated than it sounds. He is someone who knows about cultivating microbes, fungi and bacteria in the right proportions in order to come out with a ‘biologically complete’ compost.

At Warwick Farm, he works with Jersey Hemp and their fully owned subsidiary The Carbon Farm. At the time of Rural’s visit, road sweepings from St Lawrence have just arrived in a large parish vehicle.

‘We compost plant material, fix it and put it back in the ground. I farm carbon,’ Glyn explained. ‘The alternative would be for those road sweepings to be taken to the incinerator, which would release CO2 into the atmosphere, which is bonkers. ‘The trick to composting is that you’ve got to find all the ingredients that microbes like to eat, particularly bacteria and fungi. All I do is take a bit of this, a bit of that, mix it together and it turns into nice smelling compost ready to go out on the fields.’

Ideally Glyn wants to see such a localised composting operation for food and green waste in every parish. The Carbon Farm are soon to take delivery of an aerobic digester, for which they have secured sponsorship, that would accept food waste from restaurants and cafes, and 24 hours later it comes out as a pasteurised compost ingredient. Visitors to the 2019 Boat Show will have seen this demonstrated in the eco zone of the event. Now Glyn wants to upscale the model. ‘The idea is that people can offset their emissions by choosing a restaurant who send their food waste to us, and composting that waste to feed Jersey soil. Soil carbon levels have been depreciating dramatically because of how much we have taken from the soil to grow crops and don’t give back. They used to be up to 15-20%, they are currently around 3%.’

Walking around the tunnels at Jersey Hemp, Glyn points out that nothing could be grown here for 15 years because of the poor soil. But now it is yielding healthy hemp crops, which were about to be harvested.

It is estimated that in Jersey 14,000 tonnes of food waste goes to the incinerator every year. Glyn thinks the real figure could be a lot higher.

‘When we were collecting from Nude Food, the first restaurant that sent its food waste for composting, I was collecting 100 kilos a week, and that was just one small outlet. I hope to engage with everyone, including supermarkets, as it doesn’t make sense to burn inedible food waste, when it’s a natural fertiliser.’

He also wants to engage with anyone interested in the land, such as farmers, grass growers for livestock and landscape gardeners.

‘Our main focus is to make Jersey as resilient to climate change as possible and the best way of doing that is to improve the soil,’ he said. ‘Retain the topsoil and you have improved food security, water security, bio security. It just all builds from soil. It’s a much bigger picture that we have got to get our heads around. We can’t keep depleting our soil. ‘Mother Nature’s law of return is very simple. You leave 60% for her and you take 40%. It’s about farming with Mother Nature, not against it. Here at Jersey Hemp, the philosophy is that you return what you take. Jersey Hemp, by using this organic regenerative system, are committed to leaving a proportion of their crop residue to rebuild the soil.’

It’s early days for The Carbon Farm, which was formed in April, and Glyn and colleague Chris O’Brien have been establishing priorities. Over the summer, they concentrated on finding people who would deliver clean organic matter. The compost, from drop-off to product, takes about three months to make and now they are in a position to take it to the next level, getting composting machines in every parish and supporting other Jersey farmers to regenerative farming.

However, the compost can’t be offered to external parties until they get a licence, which is currently under consideration by the Government of Jersey.

Businesses, Glyn says, need to consider putting something back into the environment, and getting on board with the opportunities to compost food waste is one way of doing that. He added that one of the nicest stories that came out of lockdown was St Saviour collecting all the parish’s green waste because they didn’t make sense to incinerate it. And it saved about 900 tonnes of CO2 entering the atmosphere, which went along way to the parish meeting its Net Zero CO2 commitment at very little cost to the parish. Of course, converting to regenerative farming doesn’t come cheap, and can take two or three years to make the transition, so a farmer needs to be committed. ‘I hope we can smooth it through and make it easier for them. It is not easy but it is achievable.

‘Regenerative farming can involve experimentation with compost, cover crops and reduced or no tillage, that may threaten the short-term commerciality of farmers’ business models. To be adopted on a Islandwide scale, farmers will require encouragement, patience and possibly financial insurance or incentives to give them the time and security to learn and practise regenerative techniques. Higher education will also need to evolve to include soil conservation practices in curriculums, with endorsement from policymakers, to ensure future generations are educated in regenerative agriculture that improves Jersey’s soils. ‘I don’t believe anyone is outwardly committed to destroying Jersey’s soil’s. Covid has given everyone a chance to rethink and we’re trying to embrace that as much as we can.

‘Everything points to regenerating Jersey’s soil’s for our children’s future and I believe there are many individuals and businesses who want to do it and hopefully Carbon Farm can provide a direction.’